Lately Empire Runner Kate Papadopoulos has been kicking ass on the trails,  winning the Annandel Half Marathon,  and most recently running an excellent first Dipsea. In this interview with Kate we try to understand why she gets so psyched about trail running.

Question: Lately it seems that you have really found your stride in trail races, including winning the Annandel Half Marathon. What is it about trail races that you enjoy most?

The biggest attraction is being in nature! I also prefer small groups over large crowds. It is through Empire Runner races that I began loving and gaining confidence about racing on trails. I was hooked on running the Illsanjo classic after the first time I ran it.

About the Annadel Half this year…everything seemed to come together. Participating in Tuesday track workouts and joining a trail running group led by Kenny Brown really helped. With the trail group, not only did we travel to challenging and beautiful locations, but I also got to train with friends who were about my pace. 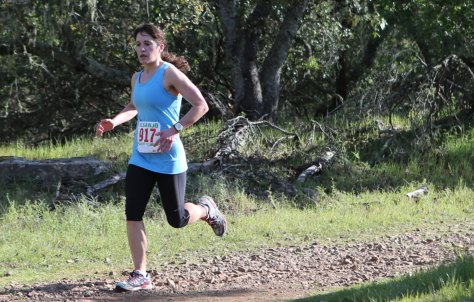 When the majority of people run on trails, they slow down because of the obstacles – rocks, water, uneven terrain, etc. They give your mind an excuse to slow down. The best trail runners gain energy and increase speed when obstacles are encountered, which is a hallmark of great cross-country runners.  What do you mentally experience when you encounter challenges on the trail?

It took me awhile to get used to trail running but now I’m hooked. When jogging on easy days I like to relax, not think about my pace, and enjoy the scenery. During races, however, it is true that you have to stay focused on every step both to keep up the pace and to keep from tripping.

You also mentioned cross-country, which I started last season. The shorter distances are challenging for me and honestly I’m more comfortable in races between 10k and half marathons. But I loved the camaraderie and group energy and look forward to the next season.

What was the most challenging part of the Dipsea race that you ran recently?

The Dipsea’s successive stairs and hills were never-ending. I’ve rarely walked more than a few steps during a race but during the Dipsea I mixed walking with jogging on the multiple flights of stairs and the steepest inclines. It felt wrong to walk during a race! But there was a tipping point where If I took the hills too hard, I would not have had the energy to speed up on the descents. As it turned out, it was often difficult to gain speed going down as well due to sharp turns, steep but legal shortcuts, and shrubs laden with poison oak.

How did you do, and where on the trail do you think you can improve next year?

I felt good about the race. It was an accomplishment just getting in. I also reached my goal of getting in next year’s Invitational. Frank Cuneo, Paul Berg, Brad Zanetti, Stephen Agar and I did a practice run on the course prior to the race day which was helpful. Food and drinks after at Stinson beach helped us recover.

With such a challenging course and numerous headstarts based on gender and age, I finished without any sense of how I did other then I was exhausted. In the open runner section (which is like the second large heat of the race) I ended up 17th overall and the 4th female, which was a huge surprise. I will be back next year and I think more hill work and faster runners around me in the invitational section will hopefully help me improve my time.

In any of your trail races, any wipeouts? Bloody knees? Poison oak? Rattlesnake scares?

No big falls yet, thankfully. When not racing I run pretty conservatively. Poison Oak? Of course. I got my worst case after taking “shortcuts” during the Dipsea training run. After the actual race, scattered bumps came back as a reminder. I’m now armed with strong steroid cream for the next exposure. Rattlesnakes? I’ve seen small ones in Annadel, but never felt threatened. Aggressive mountain bikers are probably a larger risk!

In comparison, what are your thoughts about road races? Equally enjoyable?  What’s your most memorable road race?

I enjoy trails more than the road but I’m looking for a flat half marathon to do to see what my time would be like. I’m signed up for the CloCow half marathon in September but it is full of hills. I have not run too many road races but one that sticks in my mind is the Kaiser Half marathon 2014. It was my 3rd half marathon after Annadel and CloCow. It was cold and pouring rain. I carpooled with Steve Cryer, you may know him—he is one of our shyest Empire Runners :). It was such a gigantic race that I lost him at the start and it took awhile to find him at the finish. In the final race results,however, we had serendipitously finished 2 seconds apart. It was a lesson in chip timing that our places were 430th and 431st but I only saw him at the turn around.

Have you always been good racing on trails, or is this a recent awareness? Did you run cross country at your high school in Lincoln City, Oregon? Way back then, did you think you would still be running now?

A recent awareness for sure. It took a few people pointing it out to me to realize that this was a strength. I ran some track and half a season of cross country in high school. I loved running enough to the point that I would happily run during Oregon Coast rainstorms but I was a bit more competitive in other sports, mainly basketball and volleyball. I was also plagued with knee pain that kept me out of sports part of my Junior and Senior year.

Did you run in college? If so, how did you do?

Unless running late to class counts, I did not run in college. I tried to start running again a few times for the exercise but had recurrent knee pain that for some reason or another, has not come back since I have started running again over the past 3-4 years. I feel so fortunate.

You’re working as an EHS nurse practitioner at Sutter. Are there any connections between work and running? Does running reduce stress, or give you more energy at work?

I take care of Sutter employees with work related injuries and manage other healthcare setting required vaccine and testing needs. The majority of work related injuries in this population are musculoskeletal and I love learning about human anatomy, physiology, and rehabilitation which is one connection to sports and running. The biggest connection between my work and running is geographical. I work on Summerfield Road…just a few strides from Parktrail! After work I can easily get in runs in the park or Tuesday/Thursday workouts. Running definitely helps me manage stress and has become a part of my social life.

What’s your next race?

I’m signed up for the Clo-Cow Half in September and will sign up for some local cross country races.