Even though Father’s Day has passed,  I can’t seem to stop thinking about my dad. Actually, I think about my dad all the time. Especially when I am running-which some say is all the time. Anyway, my dad died almost 4 years ago and I would think that the passing of time would reduce how much I miss him. It seems to have gone the other way. I miss him more and more all the time. Growing up my dad spent most of his free time with his roto-tiller in his garden. I never understood why he would spend so much time with something so much less interesting than my sisters and me. However, as I now have teenage daughters of my own, it is becoming quite clear how the loud, rhythmic sound of the roto-tiller was exactly what the father of 4 girls needed to survive our teenage years.

I was the youngest of the 4 girls and was always trying to get a little bit of my dad’s attention. It was useless. After spending a day teaching middle school math, tending to a dilapidated house and yard too big to maintain it was rare to get a minute of his time. I was lucky to sit next to him at the dinner table on his “good ear” side so at least if I wanted to tell him something really important I had the best chance of all of us for twenty minutes every night. It wasn’t until I was older that I realized my dad’s good ear would change periodically depending on who was sitting next to him and what they were saying. If we were asking him for money he would say he couldn’t hear us because that was his bad ear. If we were asking if his shoulders needed rubbing he heard us just fine from the same side.

When I was about 10 years old I found a way to spend time with my dad. I knew that every Sunday he would be in front of the TV watching football. I didn’t like football but I liked my dad enough to sit there. Eventually I started to grasp a few of the concepts and this led to endless questions to my dad. My sisters told me to “stop asking so many stupid questions. Dad is trying to watch the game.” And he responded with one of his many sayings; “Youth wants to know. You can ask as many questions as you want Chief (his nickname for me).” When football season turned to baseball season we watched or listened to the games and I would ask questions that he would patiently answer. I especially loved summer not only because baseball is so much better than football but also because my dad would always let me have the first sip of his beer as he sat down and turned on the game after a hot day of working in the yard. My love of sports and beer grew from this time with my dad. 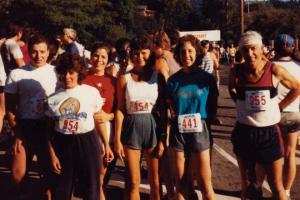 When I was 12 or so my dad started to run. This was the mid 70’s and running was only seen every four years in the Olympics. No one ran on the streets or in the park unless they were in trouble. We didn’t understand it at all. My mom thought he lost his mind as she watched him from our porch with a cocktail and cigarette in hand. One Thanksgiving day en-route to our cousins in San Francisco he pulled over our Volkswagen van on the north side of the Golden Gate Bridge. He jumped out and told my mom he was going to run across the bridge and pick him up on the other side. My sisters and I begged to go with him but he told us we weren’t trained for this run.

I watched him from the back window of the van as we drove away. I watched his big curly head of hair cut in two by a sweat band as it bobbed up and down. I stared until he became smaller and smaller and eventually faded from my sight. When he got to our van on the other side of the bridge he was sweaty, stinky and so happy. I knew right then that next year I would be out there with him. The next year all of my sisters ran with him. My mom drove the van while we made our way across the bridge and this tradition continued for many years until our cousins decided that hosting Thanksgiving was hard enough let alone providing shower facilities for their crazy cousins from Santa Rosa.

My dad continued to run and eventually started to enter races in which he won his age group almost every time. My mom continued to think he was crazy but would attend all the races and eventually his love of running passed on to my sisters and me. By then running was becoming popular and races were taking place almost every weekend. The Moscow Road Race, Kenwood, The Human Race and Young at Heart were my dad’s favorites. When we were going through his clothes after he died I found race t-shirts from the first Human Race held in Santa Rosa-circa 1982. He loved his race t-shirts. For $6 you could run a race, have a banana and a bagel and get a t-shirt. To my father who was as frugal as you will find, this was the best deal in town. When I was a freshman in college I asked him if he would run the San Francisco Marathon with me. He agreed until he saw the race entry fee was $20. This was the first time a race entry was double digits. He refused to pay the entry fee. He ran it with me as a bandit. At the finish line he was unable to get to the refreshment table without his race number. He grabbed a Mylar race blanket from the medical tent, wrapped that around him and walked right in. He eventually came to grips with the rising cost of entry fees but in 2007 when I told him I paid $150 for the New York Marathon he asked if that included air fare. 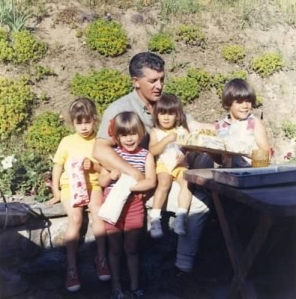 The Moscow Road race was moved to Father’s Day in the 1980’s and this became a family tradition. It was the first race I ever beat my dad. I felt kind of bad about this. When Moscow Road race ended we did the Perry’s to Perry’s race in San Francisco. I just found the trophy my dad and I won in 1993 for the Father/Daughter division. My dad had to stop running shortly after that due to congestive heart failure. He still came to all the races and cheered us on and I always knew how much he missed running. One day not long before he died I was running in the park and decided to take a loop through Oakmont where he lived. I stopped for a glass of water. He was sitting in his back yard reading the paper or doing a crossword puzzle. He asked how the run was going and I told him I was feeling really good. He was never one to express feelings or want pity so I was surprised when he told me how much he missed that feeling. It was the first time I realized that someday I too, would lose the ability to run and enjoy the pleasure of a great run.

I miss you dad and as long as I can I will continue to enjoy and thank you for teaching and sharing with me the greater things in life; football, baseball, being a parent, beer and running!