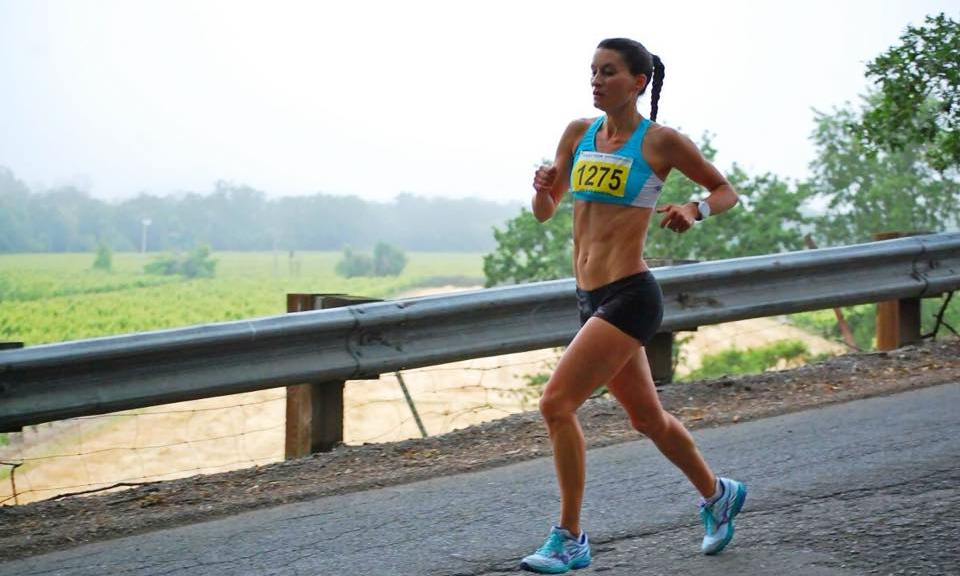 Can you tell me a little about yourself Sarah?  Where you came from, went to school, how you got into running and what you are doing now in regard to family and career.
I grew up in Guerneville, one of my most favorite places in the world!  My twin sister & I grew up playing soccer, volleyball, basketball, & tennis.  I also took ballet lessons!  We were both super active, so when I started begging my parents to send me to Ursuline in 4th grade, they started considering it since their sports programs were so good.  Ursuline’s soccer team seemed to be 1st in the league every year and back then, soccer & running is what I hoped to pursue.  Once my parents caved & my twin sister & I were accepted to Ursuline, we both went out for soccer.  After a few days of tryouts, we were both cut for being “too small.”   I went on to run cross country that Fall and am so glad I did.  By my Junior year at Ursuline, I started receiving several scholarship offers from all over the country.  I decided to go with Chico & stay close to home.  Since college, I have been working for Wells Fargo Advisors in Petaluma as a licensed associate.
The Fam Bam: I met Tom (my fiancé ) and his bulldog Bella in 2009.  In August of 2013 Tom proposed and a month after our engagement, we found out we were pregnant!  Our healthy Tommy Jr. was born three weeks early in June of 2014. By this time we had acquired two more dogs, my Doberman (& training partner), “Moose” & Bella’s brother “Jack,” who had become a rescue. Ten months after Tommy Jr was born, we rescued Moose’s sister “Nora,” & that’s how you end up with a baby and four dogs.

When I am not dragging the family around the country with me for a race, you can find us in Tahoe, or fishing, or spending time with the grandparents.  I am also an ambassador for Mudroom Backpacks and run for Thirty Birds & Gatorade.
Tell us  a little more about your HS career at Ursuline – what were your favorite events?  What were some memorable races?
I mostly ran the 800 and 1600 at Ursuline but I would occasionally run the 3200 and the 4×400 when my coach could talk me into it.  My most memorable races were probably in cross-country where I qualified for state each year.  Looking back, I know running in the Redwood Empire, was truly a gift.  I knew the girls that I was competing with were both going to be a Big Deal, and that was pretty awesome.   Julia Stamps and Sara Bei  are both such amazing athletes and people.  It goes without saying that being able to run in the same races with them, made me a better runner.  It really was a gift.

I understand that you went to Chico State on a scholarship but that you ran into more than your share of bad luck, injury and illness there.  What kept you going?
The constant injuries at Chico were pretty discouraging.   Any runner knows that being injured is the most annoying part of our sport.  What kept me going is my love of the sport & of course my coach.  Gary Towne is an amazing coach, I absolutely love him!  He definitely got me through the hard times with cross training workouts and the right trainers in the Chico State training facility.

Shortly after graduation you ran your first marathon?  This distance is way beyond the longest track races.  What made you want to do it?
I wanted to do a marathon since high school.  I just wanted to be able to say I did it.  Now here I am 26 marathons later and it doesn’t really seem like as big of a deal now ha ha!  My high school coach Heather Rosales was a marathon runner and a talented one!  I was definitely inspired by her.  Gary in Chico is also a very talented marathon runner & had actually run CIM the Sunday before my recruiting trip there.   As he showed me around campus, I kept hearing people congratulate him.  He’s so modest so it took me the whole trip to find out that he had just run a blazing marathon in Sac that weekend.  My coaches have all been pretty inspiring people to have in my life, I’ve been very lucky.

I know that you have broken 3 hours – what is your PR, where did you set it and how did that race go?
2:52.11 is my PR.  I ran that in Santa Barbara after they canceled the NYC marathon due to the hurricane.  I felt like I was ready to run NYC that year and when our plane landed in New York and we caught a cab to Manhattan, I found out the mayor decided to cancel the marathon.  My mom, Tom my fiancé and I  had a great time in New York anyway then flew home.  The very next weekend I ran the Santa Barbara Marathon.  I definitely didn’t expect a PR that weekend but of course I’ve come to expect the unexpected with marathons.
You are beyond super-active – how do you balance your training, time with your animals, family time and job responsibilities?  How much rest do you get every night?
I’ve always trained early so getting up at 5am to run 8-10 miles isn’t a big deal.  I take both of our Dobermans with me for part of my run so they get their daily exercise too.  Getting up early was a bit harder when Tommy Jr was younger and I was up nursing 3-5 times a night, but now that he’s two years old, getting up at 5am is much easier again.  I start work at 7:30 so getting my workout in before my workday starts makes life so much easier.  I cross-train or lift weights on my lunch break so once I get home from work, I have the rest of my day open with my family.  I still take Jr running in the stroller with me as well, but usually only on a double day or to give dad a short break.  Tom is an amazing help too; I couldn’t leave for three hours on a Sunday or any other day to run and workout without his constant help.  I wish I could say I get more than six to seven hours of sleep a night but honestly, that’s about it.  Some weekends I can sneak in a nap when Jr is down but that’s about the only time I can catch up.
I know that in addition to running you lift, swim and bike.  Do you stick to a pretty rigid schedule or do you adjust based on your racing goals, the way you feel etc?
I am always adjusting based on my future races and goals.  Some mornings I’ll roll out of bed and won’t be feeling as recovered as needed.  On those days, I’ll do an easy run and do a workout the following day instead.  I mix in both swimming and cycling a couple times a week for extra recovery as well.  The cycling these days is usually with Jr on the back of my mountain bike though, nothing too intense.
I just happened to be at the Montgomery HS track a month or so back and you showed up at the end of a 20 mile run as I understand it and jumped right in to some 200M repeats with Kate Papadopolous. How can you do that without getting injured?
I always try to do a few up-tempo repeats at the end of a long run just to wake up the legs after so many miles at the same pace.  My college coach always encouraged this and I’ve just stuck to it.  It was totally random seeing Kate there, so I just asked if it were okay to join her for a few.  I do a lot of my long runs with Empire Runner, Vojta Ripa but that particular day, I was doing a 20-miler solo so Kate letting me join her was awesome and much appreciated.

What are your short term goals as a runner?  Got any big races coming up?  What are your long-term goals, say in the next five to ten years?

I’d like to run sub 2:50 in a marathon eventually.  I’ve done so many marathons and only 3-4 that were completely flat.  I feel like I could run sub 2:50 on a flat course on the right day.

My next race is actually a non-running race (swim).  “Escape from the Rock,” on August 26th.  It’s one of those bucket-list items that I’ve always planned to do and finally signed up for. I’m not sure what my next running event is yet since I just ran a marathon a few weeks ago.  I’m giving myself some extra recovery since its been awhile since I’ve taken any decent amount of time off.
Who do you look up to as a runner?  Who do you look up to in life?

As a runner, that would be Sara Hall  and Julia Stamps-Mallon.  Both are very inspiring and local legends!  Verity Breen is another athlete that I am very inspired by.  She is an amazing athlete and creator/owner of Thirty Birds, the racing clothes I wear.  She will be 50 this year and still runs sub 6:30 pace in some of her races!  She is simply amazing!!

Who I look up to in life would definitely be my parents and fiancé Tom.  All have provided so much to my life and would do anything for me if needed.  I am so blessed to be surrounded by them everyday.

2 thoughts on “Interview with Sarah Hallas, by Dale Peterson”