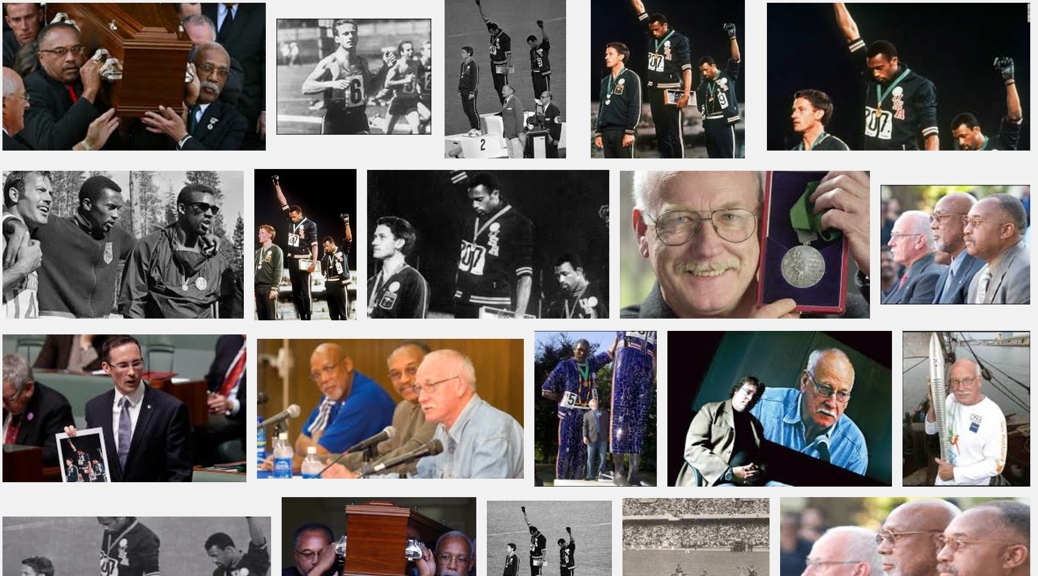 1968 was a very special year—an Olympic Year. By the time the Olympic Games started, I was 14 years old and ready to begin high school. Steve Prefontaine was entering the University of Oregon, although the nation’s #1-ranked high school runner had yet to captivate the attention of the running world. Pre’s coach, Bill Bowerman, had a nickname for him—“the Rube.” In many ways that was me. I did not have a world-wide view or much real life experience. I was raised by first generation Italian-American immigrants who had fully immersed themselves in American culture. My naiveté was further enhanced by the fact that I lived in the lily-white town of San Carlos, midway between San Francisco and San Jose.

To this 14-year-old boy, the Olympics epitomized the purity of sport. I knew nothing of how politics could enter the world of athletics. Certainly I was aware of the free speech movement across the Bay in Berkeley, the atrocities of the war in Vietnam, Communism and the Cold War, apartheid in South Africa, and the Watts riots, but there was no connection between politics and the Olympics, or so I thought. Maybe I just wanted life to remain simple. The Fundamental Principles of Olympism themselves state that “Olympism is a philosophy of life, exalting and combining in a balanced whole the qualities of body, will and mind. Blending sport with culture and education, Olympism seeks to create a way of life based on the joy of effort, the educational value of good example, social responsibility, and respect for universal fundamental ethical principles. The goal of Olympism is to place sport at the service of the harmonious development of humankind, with a view to promoting a peaceful society concerned with the preservation of human dignity.” 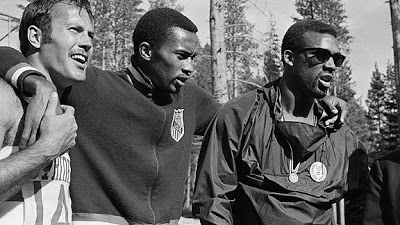 And Rule 50 of the Olympic Charter states that “No kind of demonstration or political, religious or racial propaganda is permitted in any Olympic sites, venues or other areas.” You could understand my confusion. The Olympic ideal didn’t match reality. In 1968 my simplified world view had been rocked; but it wouldn’t be until 1972, my first month of college, that I finally started to piece together the politics of our nation and our place in the world.

Sports have always been my way of separating myself from the realities of life. It was sports and the excitement of the Olympics that I hoped would give me a respite in 1968. All that was going on that year—student protests in Europe and Mexico, USSR invasion of Czechoslovakia, war in Vietnam, the assassinations of Bobby Kennedy and Martin Luther King—left me needing an escape. I dreamed about how the US team would perform. I was confident in their talent—especially in the sprints, jumps, and middle distances. Many of our best came from San Jose State University (“Speed City”) just down Highway 101 from my home. I was fortunate to have seen these runners during the indoor season. By the early summer, the outdoor season was in full swing and excitement was building thanks to some excellent early season times. In June 1968, the US Olympic Committee staged a pre-Olympic Trial meet in Los Angeles, the results of which confused athletes and fans alike. They served not to give the winners a spot on the Olympic team, but rather to exclude certain runners. After this meet, the possibility of a boycott by black athletes was becoming more likely, most notably by sprinter John Carlos, who was not allowed to run the 100 m by the Olympic Committee.

The real Olympic Trials were run in September on a specially built track up on Echo Summit off Highway 50, above South Lake Tahoe. The track was built at altitude to mimic the conditions found in Mexico City (sans the poor air quality). The track was literally cut into the forest and was the Disneyesque backdrop to one of the greatest meets attended by arguably the best Track & Field team of all time. This Olympic training camp galvanized the team amid the swirling tensions of political unrest. The Olympic Project for Human Rights (OPHR), led by Dr. Harry Edwards, was formed in order to protest the reinstatement of South Africa to the Olympics by IOC president Avery Brundage (the man who also delivered the 1936 Olympics to Hitler’s Germany in Berlin) as well as the conditions in the United States for black Americans. Despite all of this, the results of the Trials were unprecedented, with four pending world records produced. Unfortunately, they were not all ratified due to some question about the spikes being worn (specifically Puma’s “brush spike” technology). Even as a 14-year old, I began to smell a rat—how could shoes alone make you so fast? Still, I couldn’t wait for the Olympics to finally begin to see how well we would run. 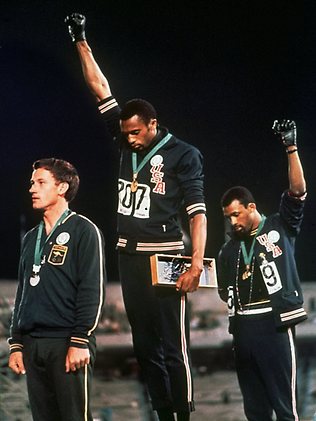 Meanwhile, over in Australia, another young man was preparing for the Olympics. By his own account, Peter Norman came to track quite by accident, but then continued to improve through juniors and then up to the national level. By the time of the 1968 Australian Games (their Olympic Trials), Norman was his country’s top 100 m – 200 m runner. In the 200 m especially, Peter had improved to near-world-class status with a time of 20.6 seconds, and was known for a very strong finish. World- wide, though, he remained a virtual unknown and wasn’t on anyone’s list as a possible winner.

At the 1968 Olympics, the sprinters and jumpers were benefitting from Mexico City’s relatively thin air (witness Bob Beamon, long jump) and Norman was ripping through the preliminary heats, winning the first heat in 20.16, a new Olympic record (though short-lived). He won his quarterfinal and scorched out a 20.06 to place second to American John Carlos. (He yelled across to Carlos, “You can have this one,” whereupon John waved him off. “The gall of this guy…” per JC). This was the fastest time he would ever run—a new Australian national record and one that still stands today.

Coming into the finals on October 16th, just four days into the Games, the US was building up their medal count and Peter Norman recalls that he was already tired of hearing our National Anthem. He was driven to try and change that. Prior to the start of the 200 m race, he had tried to get into the heads of Tommie Smith and John Carlos, but at the gun, it was Norman who got out slowly. Tommie Smith had been nursing a sore groin and also (by his own admission) got out poorly. It was John Carlos who answered the gun, blazing out of the blocks and around the corner to the lead for the stretch drive. At this point, Smith extended down the backstretch, catching and passing Carlos about halfway down the stretch and finishing in 19.83—a gold medal, a new National, Olympic, and a World Record. Carlos, looking to his left as Smith flew by, eased up in the final 40 meters. Suddenly, out of the bottom of the TV screen, came Norman. He flew past Carlos, who was unable to respond after shutting it down. Final result: Peter Norman, the silver medal in 20.06; John Carlos, the bronze medal in 20.10. I remember being totally upset at Carlos for letting that Australian guy get the silver. I was like a starving lion in front of a 10-lb T-bone for medals. I wanted total dominance and “we” gave one away only four days into it. I couldn’t possibly know what was to come.

I don’t think I need to go into great detail about the award ceremony. The picture of Tommie Smith, Peter Norman, and John Carlos on the podium—Smith and Carlos shoeless, with their black-gloved fists raised in a black power salute—remains perhaps the most celebrated photo in Olympic history. It came at a time when a gesture for Human Rights in front of the world was necessary. I was stunned and didn’t understand it. I was swayed by the commentators’ explanation. But most importantly, what would the officials do to them?

Unbeknownst to me and most of the world, Peter Norman was part of the demonstration. He was wearing the OPHR patch on his chest in solidarity with Smith and Carlos. (He remained in solidarity with them until his death in 2006.) The Australian Olympic Committee and IOC asked—no demanded—that he rescind his solidarity, but he would not. The three athletes’ lives were forever entwined. Tommie Smith and John Carlos were kicked off the team, removed from the Olympic Village, and barely survived death threats as they were flown back to the US. Once home, their lives were not much better. Neither man could find gainful employment at a time when a gold medal was the only realistic way to get a windfall during the “amateur” days of track and field. (See Wheaties Box). Money and glory were not theirs, nor was the adulation of the sporting community for simply being the best in the world. They traded this reward for a more important message.

For my part, I was mad that they were not available for any relay duties. It didn’t matter; the US got gold in both relays. It was at this point I was beginning to understand that there might be something bigger than the Olympics as I struggled with THEIR explanation of the shoeless entry, the black gloves, and raised fists.

There will be a Part II to this article, but until April, here is a list of videos/articles of interest:

The John Carlos Story: The Sports Moment that Changed the World by John Carlos and Dave Zirin (book)