Question: As a professional photographer for the Press Democrat shooting sports, do you “see things” or observe things while taking photographs that the normal spectators may not appreciate?

Answer: I don’t think it’s so much that I see or observe things that normal spectators may not appreciate. Everyone interprets the world differently based on the whole of their life experience. The difference in seeing within any group of professional shooters can vary a great deal. But I do think that shooters as a whole are more inclined to look for different angles and moments, and are motivated to challenge themselves visually a little more. You might be looking for interesting light, graphic elements, or good interaction/reaction, in addition to peak action.

What’s your favorite sports photo of 2015 and why?

My favorite sports photo of 2015 has to be Steph Curry hugging Klay Thompson during the Warriors playoff run to the championships. The shot came during a 1-point win against the Houston Rockets. It captures the joy and passion of the moment between the players, and the jubilant crowd in the background. Concentrating on shooting game action is easy. Remembering to keep looking after the whistle blows is hard. And during the playoffs (in any sport) it’s those moments that set things apart from the regular season games.

When you shoot running events, do you have any observations that other people might not have since you’re looking through a lens? 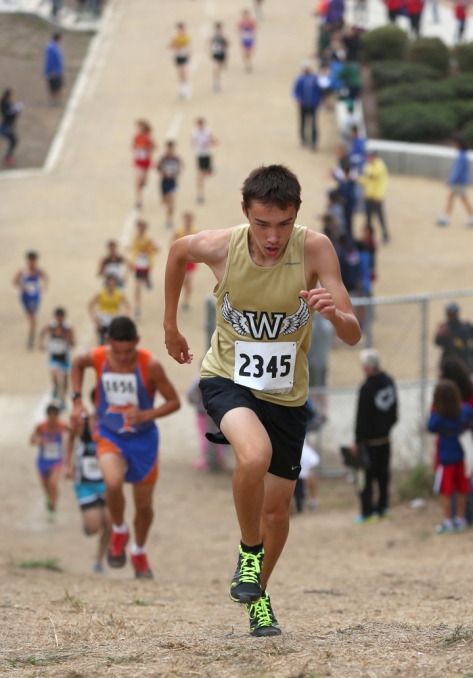 Shooting cross country races presents a certain set of challenges. You have to scope out the course ahead of time, and think about the best environments to capture the runners as they pass. And you have to come up with a plan on the fly to get you into positions where you can see the runners on multiple occasions. I look for areas with nice light, something graphic (like an S-curve), or a nice hill to show the strain of the runners. Then I also pull out tricks, like panning with a slow shutter speed, to show the motion and speed of the sport. I’ll try low wide angles , and framing through trees or other landmarks to mix things up. Every course presents its own opportunities and challenges. The tricky thing about shooting running is that your best shot may not be of the winner. Photographing track is an entirely different beast. You’re limited in your shooting positions and access. In high school, that’s not too much of an issue, but when shooting USATF events, things get really difficult. You have to stake out positions at the finish line, and get on waiting lists to shoot from the infield. A really good accommodating media coordinator that understands your specific needs is really key at those events.

Were you a runner in high school, and if so, what are your favorite memories? Did you learn anything that has helped you as an adult?

I ran four years of cross country at Dana Hills High School. I was a decent runner on a team of extremely talented runners. The program was so deep that our JV team would beat most of the Varsity teams in our area. But really, it was all about the camaraderie. We had so much fun at practices. On long runs, we’d bring a tennis ball and play catch. Or we’d all run with our eyes closed and have one person calling out turns. Just silly stuff, but it kept things really fun. Don’t get me wrong, we trained hard. We just found a way to not notice that we were working hard. At least I thought I knew what hard work was.

When I got to college at UCSB, I wanted to do something really collegiate looking. I know, it was weird. So I joined crew. I was 145 pounds when I graduated high school, so I went into crew thinking I would drop some weight and be a coxswain. The coach saw me at 5’10” and said he’d make a rower out of me. Three months later, I was topped out at 170 pounds, then dropped 10 pounds to make the lightweight boat. Rowing made me realize that I hadn’t worked nearly close to my potential as a high school athlete. That’s when everything really came together for me both physically and mentally as an athlete. My coach was the US Olympic lightweight rowing coach at the time, and he really trained the mental aspect of endurance well. I think that to excel at endurance sports, athletes need a level of mental maturity that I didn’t have in high school, but later achieved in college.

Now that your son Lucas is in High School, and your daughter is running as well, has it renewed your interest in running? Are you running to stay in shape on a regular basis?

I’ve never stopped being a fan of running as a sport. Covering the great local athletes, and especially the phenomenal elite female runners that Sonoma County has produced, has always kept me interested. That said, watching my kids grow and flourish as runners has definitely rekindled my interest in running for myself again. After college and before kids, it was easy to get out there and stay in shape. But after having kids, I didn’t make exercise a priority. It wasn’t until I had a bout of insomnia that I returned to running on a consistent basis. I was just lying in bed staring at the ceiling at 4 a.m., so I figured I’d might as well pull on some shoes and hit the road. Then about five years ago, I had pretty severe lower back pain that took me out for a while. When I tried to start running again, I kept getting sidelined by knee and ankle injuries that I’d never encountered before. It was all a bit frustrating. I decided to return to what put me in the best shape of my life during college, and got myself a rowing machine. I row on a daily basis. But now that my daughter has taken up running, I’ve been pulling on the running shoes again to run with her. We have such a nice time running together. I had forgotten how much I enjoy the sensation of running. So now I’ll be splitting my time between rowing and running.

When you watch your kids race, do you get an adrenaline rush? What do you experience as a parent?

Watching my kids race is hard to describe. Lilja is still in middle school and just started running, so it’s really not that serious and I simply want her to have fun. Lucas just finished his freshman year of cross country, and watching him race is fun…., but stressful. I’m definitely more nervous watching his races than I ever was when I was toeing the line myself. My wife, Leena, and I get serious butterflies in our stomaches before every meet. He’s still learning how to race, and he’s on the cusp of really being a standout. I just try to pass on the mental tools that my rowing coach taught me. I don’t want to be one of those overzealous parents. I really want my kids to have fun out there and enjoy running for the rest of their lives. I’m ecstatic that they’ve both gravitated to running on their own. I think it’s one of the most positive and encouraging sports communities out there. In some other team sports, you’re cheering for your team and against the other team. In running, you’re pretty much cheering for everybody to achieve their best. It bothers me when I’m at a race and I hear someone yell, “C’mon, you can beat this guy!”. I know they’re trying to encourage their own runner, or give them a target. But the other person is going to hear that yelling too, and how do you think that’s going to make them feel? To me, it’s not about beating some opponent. It’s about self-improvement.

The University of Missouri is famous for it’s journalism program – what’s the most important thing about photography that you learned there?

The program’s motto is a quote by it’s founder, Cliff Edom: “Show truth with a camera.” That’s what I strive for in my photography. People always think they have to pretend to do something. No. I just need to know when I can catch things happening naturally. I recently had an assignment shooting hospital volunteers. The PR person kept on trying to stage photos of the volunteers pretending to do things. I finally got through to her that all I wanted to do was hang around and photograph them doing whatever they normally would be doing if I weren’t present. After the photos ran in the paper, I received a phone call from her saying how great the photos turned out and how much she appreciated the true moments that I was able to capture. She also stated how much better the photos looked than the staged photos that commercial photographers shoot for their promotional materials. Nothing beats real life. You just have to let it happen and be ready for it.

How long did you work at The Idaho Stateman newspaper in Boise, and how did you land in Santa Rosa? How long have you been with the Press Democrat?

I worked for The Idaho Statesman for two years. It was my first staff position. I went their for a summer internship, and they offered me a position when it ended. It was a beautiful place to live and work, and my boss was the nicest person. I really loved Boise (and Idaho), but it’s a little… not close to anything else. I left because I wanted to return to California, and to be closer to the ocean. I freelanced for a year in Southern California for a year before a mentor recommended for me to take a look at The Press-Democrat. The photo editor at the time was John Metzger, who was a bit of a legend in the newspaper photo world. I cold called him and sent him my portfolio. He flew me up the next week and we hit it off right away. There wasn’t an opening, so he actually created a position for me. That was back in 1998, so I’ve been here for 17.5 years. Unfortunately, John died of a heart attack in 2005.

What’s your favorite sport to photograph, and why?

I don’t know if I have a favorite sport to photograph. I guess I like to shoot any sport with nice action and drama. I’ve been on the Raiders, Warriors and A’s beat since I got here, and also fill in on 49ers and Giants. I really just enjoy shooting alongside the other photographers in the Bay Area. It’s a lot of fun when we get together. I like the ability to pick my own spot to shoot at football. Baseball is tough, because you’re assigned a specific shooting position. And I find it to be a bit of a slow game. But shooting it when it counts, like during the playoffs and World Series is a really fun challenge. I really enjoy shooting basketball, but the NBA is becoming one of the most restrictive leagues where photography is concerned. They’ve eliminated so many floor shooting positions that smaller outlets like my paper rarely can get a floor spot anymore.

I do love photographing high school sports, as well. Access is generally not an issue. You usually don’t get athletes that have developed self-important attitudes. I’ve had the pleasure of interacting with some really sweet kids (It broke my heart when I heard of Sarah Sumpter’s passing recently).  In high school sports, you get athletes who are competing because of the love of the sport.