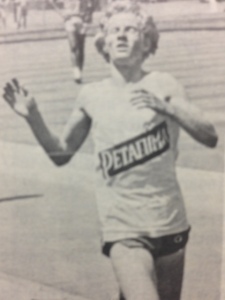 While not exactly the Precambrian era, in 1972 most television sets were still black and white and virtually every single American running track was still covered in cinder. That summer, in a Sonoma County town better known for wrist wrestling than track & field, an aspiring half miler was glued to the broadcast of the Munich Olympic Games. All eyes were on Steve Prefontaine, Frank Shorter and some guy from Finland who was reputed to drink nothing but reindeer milk. Oh, and there was that 800 meter race where a hat-wearing guy from Ohio went from dead last after one lap to a miraculous and entirely unanticipated gold medal victory. That Petaluma lad went out almost immediately thereafter and got himself a golf cap, causing his high school teammates to forever nickname him Wottle-ridge…Danny Wottle-ridge.

Fast forward to just less than three years later when the telephone rings in the Aldridge family abode. “Hello, my name is Dave Wottle and I am trying to reach Dan Aldridge.” Pause. “”Um, this is Danny Aldridge.” … “Well great…thanks for taking my call. I wanted to talk to you about the reasons why Bowling Green is the perfect place for you to come to school next year.”

Within the week several other such calls arrived from men like Jim Ryun regarding the University of Kansas and why his alma was the one that ‘matered’.

In 1956 the two time Olympian-to-be, Jerry Siebert, (Willits HS) set the county two lap mark. One he would hold for nineteen long years. Danny massacred that standard with his still standing half mile mark of 1:49.7… an Empire benchmark that remains unsurpassed four entire decades later, hence the nature of the Wottle and Ryun sort of telephone calls. Schooling at USC, Santa Rosa JC and then Cal Poly San Luis Obispo would follow. As a CPSLO Mustang, Danny would win the NCAA Dll 1500 meter title twice and his 3:40.67 set eons ago in 1978 remains that institution’s school record 37 years thereafter.

Allow me if you will to zoom ahead even further into the  future to 1981 when, just shy of nine years after donning his Wottlesque cap, Danny now representing the famed Sub 4 Track Club, finds himself lining up alongside the Kenyan great, Henry Rono, best known for setting 4 world records in just 81 days. The event was the one mile run at the Bruce Jenner Invitational Track Meet held annually at San Jose City College. Aldridge’s best ever mark at that time was a 4:04. At the halfway point, Danny, Rono, and another Kenyan, Kip Cheruiyot were inseparable as they split 880 yards in 2:01. Then the real racing began as Rono surged into the lead with the Petaluma kid right on his tail when the timer called out “3:01” at the three quarter mark. It was a ‘now or never’ moment going into the fourth lap when Aldridge aggressively grabbed the reins. By the time they hit the final turn, all that was going through the mind of the 24 year old Aldridge was concentration on technique…”quick feet, drive arms, relaxed shoulders.” Danny maintained his form all the way up the homestretch, elated to have beaten the mighty African. Only some twenty minutes after the fact, when the announcer confirmed his winning time of 3:59.9, did he know for sure that a 1975 vow he had made to his high school coach, Doug Johnson, had become a reality. Dan Aldridge was now a bona fide sub four minute miler. It remains the only sub-4 mile by a Sonoma County athlete to this very day. 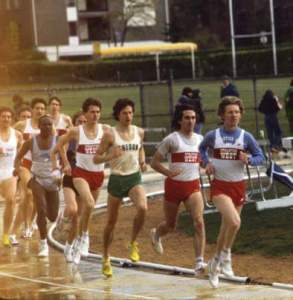 Mr. Aldridge’s running career continued to blossom as a Eugene, Oregon based Nike sponsored member of the famed Athletics West squad. He’d break four minutes on two more occasions and also record 3:38.70 for the 1500 meters…a time that translates to precisely 3:56.19 for the one mile distance. At the Crystal Palace in London, Danny would rabbit Olympic gold medallist Sebastian Coe at faster than 1500 meter world record pace. At the other end of the spectrum he’d win the NapaValley Marathon twice. In between he’d step off personal bests of 13:30.95 for the 5,000 meters and 28:28.84 for twice the distance. That’s an awful lot of athletic success across a wide array of distances and over a very long time. When asked the single best advice he had ever received, Danny replied “Don’t chase times, chase competition. The times will come if you just get out there and race.” Insightful words of wisdom that he offers up to the athletes that he coaches here in the Redwood Empire.

Although he very much shies away from the spotlight, when Dan Aldridge speaks, people listen.

As a coach of aspiring middle and long distance runners for more than twenty five years, Dan has mentored some of the county’s very best. While at Sonoma State University he fostered the talent of Mike Stone, a 13:53 5,000 meters Olympic Trials qualifier. He trained Santa Rosa High School superstar, Julia Stamps, to glory and is currently the guiding light for phenom Rylee Bowen and her Sonoma Academy teammates. Although entirely reticent to accept any credit whatsoever for having done so, his role as athlete and coach has inspired countless Sonoma County runners to be their very best. But wait, there’s more. Pop into the aptly named Heart and Sole running store on Brookwood in Santa Rosa and you are in for a treat. Dan’s shop teems with history and knowledge. It’s a veritable running museum with Dan as its living treasure. When you go in, Danny makes you feel immediately comfortable as if you just slipped on your favorite old sweater. Ask him about the mementos that line the walls. Ask about improving your half marathon time. Ask about the weather, the news, the game, but whatever you do, don’t ask him whom he beat, when and by how much. That line of questioning is just not part of his heart, nor his soul. 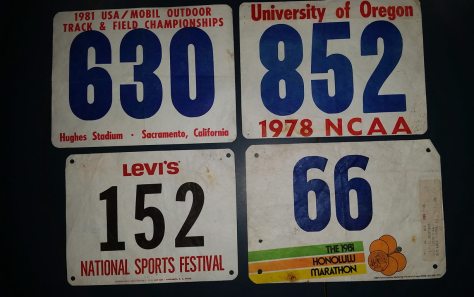