I am not sure life was ever going to be long enough for Sarah Sumpter. 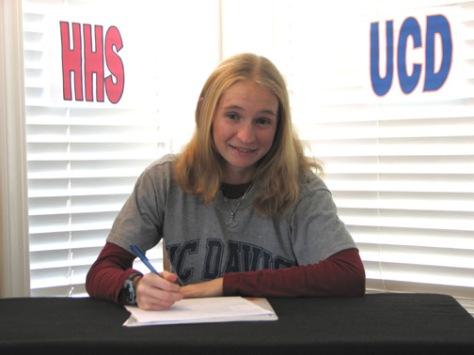 It is not so much that she died too young or that the cancer moved too quickly for her. Sarah’s life—regardless of time spent, friends made, miles run, or runners inspired—could never satisfy her. There was just so little time…

When I first met Sarah, it became immediately apparent that the road before her was always going to be too short. Every finish line would be far too near. However, she also believed that the thrill of the race was not in its completion, but in the struggle. If it was up to her, the run would never end. She loved the grind.

I began recruiting Sarah to run at UC Davis back in 2007, and it was that fall in which she torched courses, shattered records, collected championships, and became a sensation. It was just months later in early 2008 when she publicly shared her struggle with disordered eating, and she had to begin all over again.

She would have several new beginnings over the remaining seven years of her life, and these victories and challenges have been documented ad nauseam, and by far better writers than me. Suffice to say, Sarah did as Rudyard Kipling challenged all of us—runners especially, I believe—she met with Triumph and Disaster in her life and treated those two impostors just the same. There was no vertical oscillation in her emotion regardless of occasion—simply forward motion—a tireless pursuit of something untouchable for most of us in this life. It is something beyond courage that outranks any nobility, and believe me, there is nothing valiant in the death of someone so beautiful. For lack of a better term, it was Grit, and she was its most precious vessel.

Sarah Sumpter did not beat her cancer back with fists balled in rage. Instead, she loved her place as its opponent and ran toward it—she ran through it—and she did this with a heart full of faith and spirit of indomitable passion for the community of people she held most dear—her fellow runners. She truly filled “the unforgiving minute with sixty seconds worth of distance run.” She welcomed the struggles set before her and those that bombarded her body as simply the demands of the race in which she was entered. There was nothing else to do but to keep going.

So when Sarah called me back in May and said we needed to talk, I could feel the intent in her voice. By this time, she was back home in Cloverdale and nursing herself through a nagging injury that kept her running restricted. We met the next day in Healdsburg.

“I need to do the marathon now, Pup.”

At the time, the doctors were pleased with where she was with her cancer, so this was not a notion prompted by any outward indications of what would come to pass in short time. However, they do say that the great ones have a nose for the finish line, and in Sarah’s case, it seemed that she could sense the line accelerating toward her even then.

“Will you coach me?”

It was in this moment that I became aware of a piece of coaching I had never considered before.

Through the years, I have always been concerned with getting the athletes in my charge to the finish line as quickly as possible. In its crudest light, the idea was to build them up, callous them, sharpen them and set them in motion. To the finish line or bust.

With Sarah, in this pastoral setting outside the coffee shop on the square in Healdsburg, I realized our goal was to just get her to the starting line. The running would be the easy part, I recall thinking. If we could just give her a chance to start the one thing she always wanted to finish…

That is when the words of the great Kenyan cross country champion, John Ngugi, pooled in my mind before they spilled from my tongue. 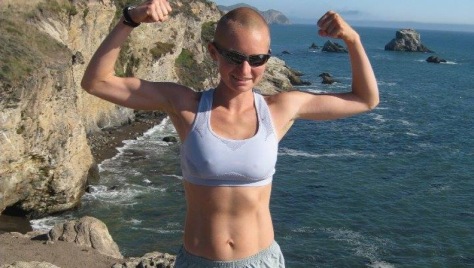 We would adopt this as our training philosophy moving forward—before we knew about the offer from the New York City Marathon—before she won at Kenwood on July 4th despite a nasty fall—before we discovered why she fell in the first place and never ran again just three weeks later. We would remind each other over and again…if you feel good, go.

There were long runs, hill sessions, tempo runs, long intervals, blended sessions, special blocks, strides and recovery runs—all the usual menu items for your marathoner, and Sarah devoured them in her typical understated fashion. There was also the stifling sickness brought on by each round of new treatment—an overwhelming lethargy rooted in her disease—a battery of unpredictable days Sarah fended off with whatever she could muster for that day…even walking. If she could go, she would go, and go hard.

In mid-June, when she heard from the New York City Marathon, Sarah was offered two things—entry into the professional women’s field for the greatest American race and a promise that her acceptance of the offer would remain private until we could be certain she would make it to the start. She finally had her marathon and it was just four short months away.

The next day, her newest chemo drugs arrived. Two days later, her body was “a toxic waste dump,” she said. Two weeks later, she won the 10k at Kenwood in a new course PR. She would not run for another week, but when she did, she closed her run with miles so fast that we really began to see her goal of a 2:37 marathon as a real possibility. Three days later, the chemo took her away from training yet again for another 48 hours. By the 19th of July, she had lost feeling in her left foot, calf, and hand.

The very next day, on July 20th, despite the loss of feeling on her left side, Sarah said she decided to go the Ngugi route and ran 100 minutes “because I can,” she said. Despite closing the run with several successive miles just a shadow over six-minute pace, Sarah felt it was slow.

“I needed to do something, so I’ll take it.”

It would be the last run of her life.

Not all of life’s miles are completed on the road or trail, and while Sarah Sumpter logged thousands of miles under the power of her own two feet, the distance covered by her story has not been measured because it has not yet reached its conclusion.

Sarah’s nickname, “Stump,” came to her initially by folly—a misspelling in a list of meet entries. In time, however, this name became a fortuitous moniker—a testimony to her ability to not be uprooted.

I never called her Stump because I used to think it meant “cut down,” and that was not how I knew her. To me, she was too big, too much–a giant wrapped in a feisty pixie shell. Now, however, in the wake of her passing, I find myself examining the nature of this nickname.

A Stump marks the passing of time with an open face and honest rings. A Stump shows its scars because those scars are what created it in the first place. A Stump stands as a monument to the great heights of the past. Most importantly, a Stump is the source of new life. Its deep roots provide the means for new sprouts to grow into new trees.

What Sarah has done is leave us the gift of herself. Her death is not an ending because I don’t believe she ever finished. She is leaving us not to finish the race, but to begin anew. And each time we lace up our shoes and put foot to pavement or tread to trail, we celebrate Sarah Sumpter. We are the keepers of her legacy.

The run continues. We champion the grind. I promise you, Sarah, we will not waste good time.

(Lead photo courtesy of Sarah Sumpter-formerly of Healdsburg HS and pictured above and UC Davis coach, Drew Wartenburg and his twitter account:  pic.twitter.com/cggT1IL9 )

4 thoughts on “Do Not Waste Good Time – My Reflections on Sarah Sumpter, by Chris Puppione”