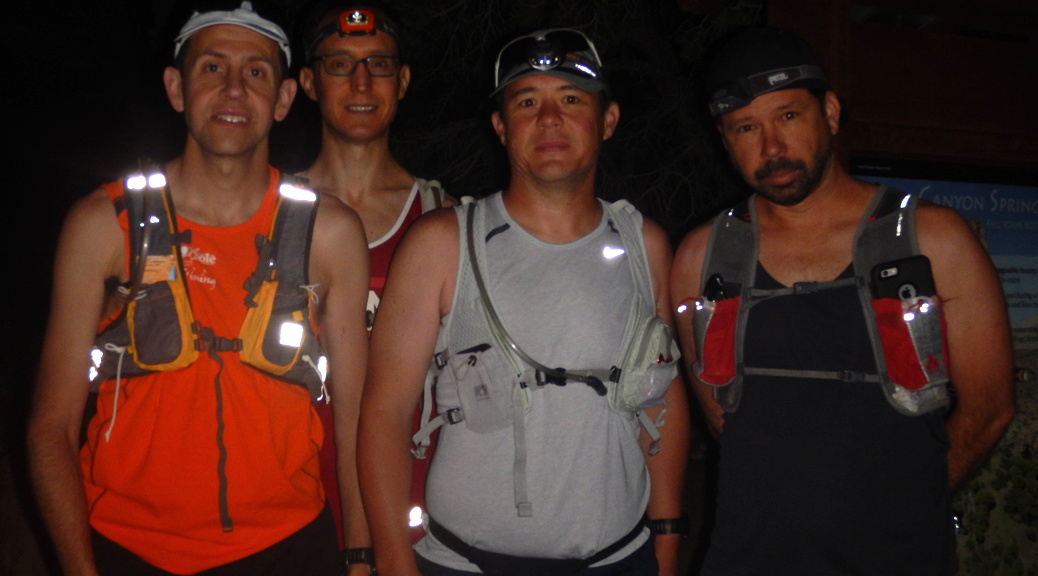 Last month 3 friends, Kathy and myself took a trip to the Grand Canyon to run the “Rim to Rim”. The Rim to Rim trail is 20miles from the South Rim of the Grand Canyon to the North Rim, give or take a mile, with 7,000 feet of gain/loss. Our intentions were to do one direction and then turn around the next day and go back.

Seeing the Grand Canyon for the first time, it was very impressive and then to think “we are running where, and we are getting there how?” 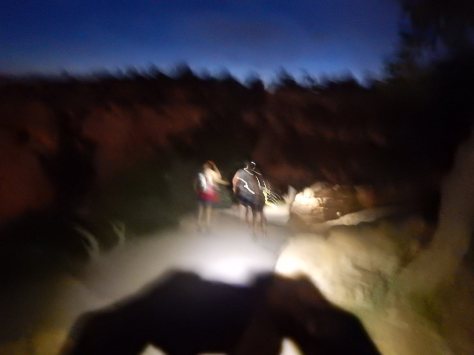 Our 4 am start the next morning came early. After Kathy dropped us off in the parking lot we put all of our gear on and found the trailhead. We probably ran about 100 yards on a paved path through pine trees. Taking up the rear, I wasn’t sure why we came to a sudden stop and then my light shined on the side, a small sign “South Kaibab” the arrow pointed straight but it should have been pointing down.

All of a sudden there was just wide open darkness in front of us. Mike decided to be the brave one and make the first move over the edge. After that none of us hesitated any longer.

Even though we had an almost full moon to give a faint glow to the rocks, most of the what we could see was with our headlamps. Except for the constant downhill, switchbacks and swirling winds and darkness if there was no rock to be illuminated we could have been on a night run on any trail. 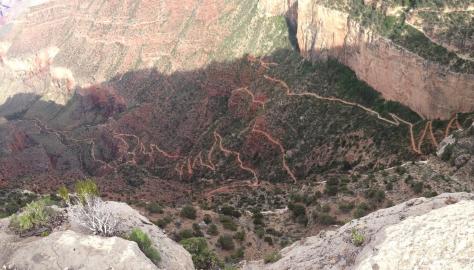 Running in 4th on the dusty switchbacks I had to drop back because the swirling winds were picking up the dust that was being kicked up and making the illuminated trail seem hazy. Being about 30 yards back or so I could see the three headlights piercing the dark trail below. Slowly the sun started to give a faint glow illuminating the Canyon. We had been descending for about 20 minutes and finely we could see how far we had descended from the rim. We couldn’t see the bottom but based on our time and distance we were about a third of the way down.

The three of us came to an edge which had about 20 switchbacks below. Our first runner Scott Patty was out of site. Yelling his name startled me as I was not expecting to hear an echo let alone it bouncing off several walls.

After dropping for about 50 minutes we got our first glimpse of the Colorado River. It still looked a long way down. Another 30 minutes down and we were going a cross the “single track” suspension bridge.

The view on the bottom was completely different than our trip down. Lush plants and trees all around. As we made our way through the camp site. We could smell all of the breakfasts being cooked and saw everyone just waking up.

Leaving the Colorado river basin we were following a tributary up which had canyon walls that were hundreds of feet high with only about 40 feet in between. 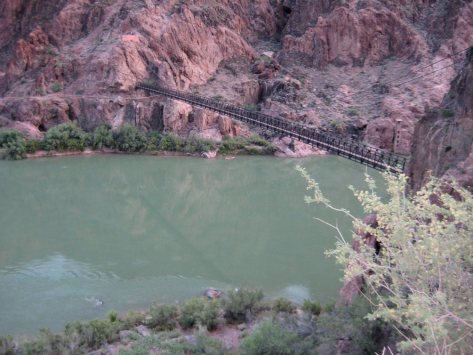 Somewhere along the way we were told by hikers that one of our other runners, Scott Patty had fallen. We asked if he was still running and they said yes so we knew he was fine.

The final climb up to the North Rim is only about 5 miles but gains 7,000 ft and even though it was only 9 am the temperature was 90 degrees.

Cresting the North Rim I saw Scott who was all recovered by now and Mike Long who crested the top a while a head of me. After getting an infusion of cold coke I was back to normal as we waited for Scott Bice to finish up.

We were all grateful for the water fountains that were spaced about 3miles apart on the way up.

We knew it was going to be challenging. And it was. No matter how hard you try to image the canyon, until you actually attempt 8 miles at an average of 21% grade, in heat after all ready being on the move for 4 hours you don’t know really what to expect.

Due to my preparation and how I felt I (along with Mike Long and Scott Bice)  I opted to drive back around the canyon while Scott Patty was dropped of at the trailhead at 4am for his return adventure.

We all agreed that we need to go back in 2016 better prepared to make the return trip on the second day.

Although my only visit to the Grand Canyon was back in 1990, this visit my passport was being a driver to the North Rim. Even though the guys could have done it without me, being able to bring their gear to the North Rim after their 22 mile trek, made it more comfortable. We started early, I dropped them at the Trail Head, South Kaibab at 4:10, in the dark. I proceeded with our rental van on an almost 5 hour, 212 mile ride to the North Rim. The towns are small and not very populated. I reached the North Kaibab Trailhead right before 10. Parked the van, collected my things to do a short hike down the trail to meet the guys. As I got to the trailhead Scott Patty was already running up. Looking good I thought he probably could handle a return run, same day, he said no way! I continued down the trail seeking Kenny his friends Scott and Mike. Almost a mile down I ran into Mike and Kenny. Both looking ready to be back at the North Kaibab Trailhead. I asked what happened to Scott Bice. Mike said we have not seen him since Phanton Ranch. I said what? and he only had one water bottle. Oh no.. Some time later Scott Patty ran back and met him. They made him make a photo finish running up North Kaibab Trail. All back and safe. 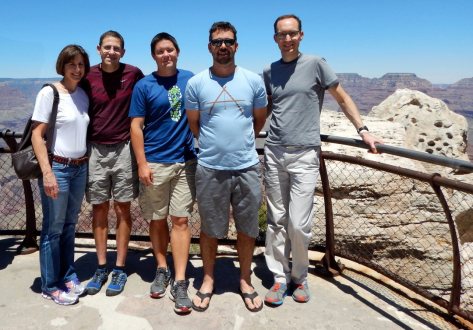 2 thoughts on “Rim to Rim, by Kenny & Kathy Brown”