The Dante Club near Sac State was packed and everyone was in a celebratory mood, enjoying good food and beverages.  There were literally dozens of individual and team awards covering the spectrum from Roads and Cross-Country to Ultra and Mountain Running Grand Prix’s.

The Guest Speaker was none other than the living legend Billy Mills, surprise winner of the 1964 Olympic 10,000 M in Tokyo Japan. 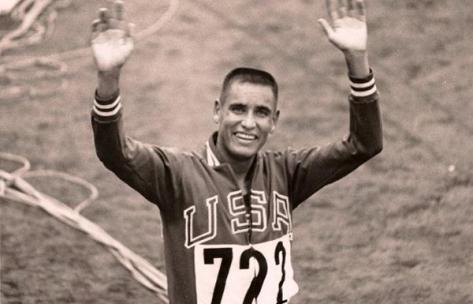 Mills, whose story was immortalized in the 1983 movie Running Brave, continues to be brave indeed, championing human-rights and celebrating the common bonds between diverse peoples across the globe.

Mills did not play it safe at the banquet either.  His talk, though held together by a running themed thread touched on his hard-scrabble childhood, his struggles with racism and bigotry and his own private demons.  At many points during his talk, he fearlessly touched on what were certainly uncomfortable subjects for many in the audience. When he finished he received a well-deserved standing ovation from the mostly white, economically comfortable audience.

The Empire Runners were well represented on this night.

David White, Solomon Leung and Dale Peterson were on hand to receive their respective awards.

David picked up the award as the 2017 Cross-Country Grand Prix 50-59 Champion.

Solomon was awarded as the 2017 Ultra Grand Prix Under-30 Champion in that grueling series.

Dale was awarded the 2017 Volunteer of the Year award for Cross Country for his work as a USATF-PA official.

It was a fun and rewarding evening for all who attended.