Running Amongst Tea Fields and Spices: A race report for the Vagamon Ultrail 50K in Kerala state, India 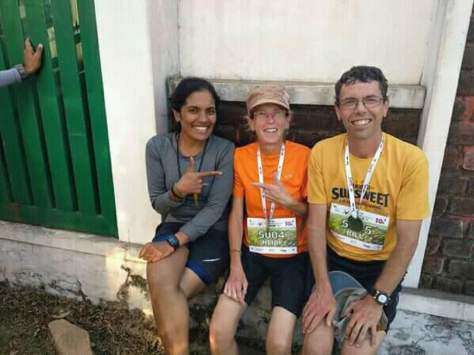 Running in a new area is usually quite interesting, and something many runners seek out.  An added twist to this is running in a new area where running is not common at all.  This adds a whole new dimension to the experience.  Bill and I decided to spend 5 weeks in Kerala, one of the southern states in India.  Kerala is known for its lush tropics, spices, tea fields, food, and mountains.  While planning for the trip, we came across a listing for a 50K set amongst all of this!  We couldn’t believe it, so of course we signed up, despite the fact that I’d never run a 50K before, let alone a marathon.  While I run and hike regularly, I pinned a lot of hope on the idea that the landscape would carry me through (and Bill!).  The race was at the tail end of our trip, so for the first 4 weeks in Kerala we ran every day followed by afternoon hikes.  I think this ultimately helped me in being able to finish with a big smile on my face.

The race was based in Vagamon, at an elevation of ~1100 meters (3400 ft) above sea level.  Vagamon is a small village in the Indian state of Kerala and is mainly supported by outdoor adventure activities in the surrounding areas.  With its scenic valleys, pine forests, spice plantations, tea estates, waterfalls, bald grassy hill tops, and overall greenery, it really is rather striking area.  The course took us through these different terrains and was very well-marked with signs and friendly volunteers.  The elevation provided relief from the heat and humidity from the tropical coastal areas and was really quite pleasant for running – 60 deg at the start and about 75 deg at the finish.

We opted to participate in a partial package tour for the race.  This was perfect as it allowed us the opportunity to spend the night before and the night after the race, in the race headquarters hotel.  It also included a pre and post-race breakfasts and dinners, transportation to and from the start and finish areas, and transportation back to Cochin, the city with the airport for our flight home.  It made things very simple to use this package as we could just focus on the experience and not any of the logistics. 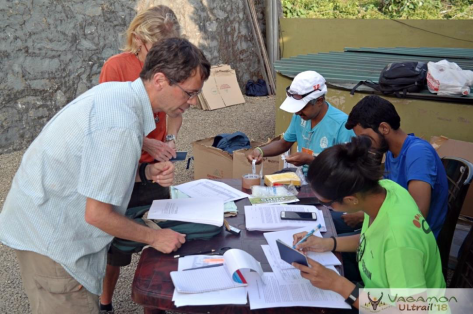 Checking in at the race hotel

The day before the race, we checked in at the race hotel and received our bib number and T-shirt.  Much to our surprise, all of the bibs had the first name of the runner printed on the front.  Even more of a surprise was then seeing the race T-Shirt, which has the full names of each the runners printed on the back!   Overall, the T-shirt is a nice design but unfortunately the color is a rather bright pink/peach blend, which is neither Bill nor my favorite so you probably won’t be seeing either of us wear it in public.    Before the pre-race briefing, we struck up a conversation with the race organizers and learned a bit about the club that was putting on the race.  The club is called Soles of Cochin and they started organizing workouts and races about 3 years ago.  Their first race was the Spice Coast Marathon in Cochin, which is at sea level along the coast, and where the climate is always hot and humid.  Our race, The Vagamon Ultrail, was the clubs first organized race in this more mountainous area.   We found out when chatting with the organizers, that we were the first international participants in any of their races! As night fell, the race briefing finally started and luckily for us, it was all in English.  So many languages are spoken in India that English ends up being the main common language for all of them.   Immediately following the briefing was a pre-race dinner, served outdoors.

Early in the race through the tea fields

Saturday, January 6th was race day and it was so hard to sleep the night before because I was so nervous and excited.  The bus arrived at 5:30am to take us to the start at a schoolyard and also breakfast for those who could eat.  Bill managed to wolf down the provided hummus and flatbreads, while I sipped a cup of tea.  The race briefing was short and sweet with lots of cheers to just celebrate us all being there.  We started on time at 6:30am and immediately found ourselves immersed in the tea fields.  About 90 percent of the course was on trails or dirt roads, with the rest being on paved, but rural roads.  Overall, the course was very technical with a lot of steep and/or overgrown sections and rocky footing everywhere except the paved sections.

In general, there was an Aid Station or a Rest Area every 4 kms (2.5 mi).  The aid stations were incredibly well-stocked with water, energy drinks, fruits etc. during the race.  The rest areas along the course were additional items and places to lie down.  Because this race was so incredibly well staffed and organized, we didn’t need to carry anything!  With the aid stations being so frequent, we were never short on water or anything else we needed.  At the 20K rest area, there was hot food and tons of it!  We actually stopped for over 20 minutes to sit down and have a proper breakfast!  During our travels in Kerala we fell head over heels in love with the food. In addition to flatbreads with hummus, they had Idli’s, which are one of Kerala’s main breakfast staples.  They are made up of fermented roasted rice and lentil flour and served with various curries and chutney’s.  They had tons of fruit, coconuts, tea & coffee etc.  No one left hungry.

Side by side the whole way!

Our time goal for the race was simply to beat the pre-stated 10-hour time limit and the 30km intermediate time limit of 6 hours.  We knew ahead of time that the course was actually 52.7km, a little bonus distance at no extra costJ.  Our plan was to run the flats and downhills but walk the uphills and steep rocky sections.  The course was marked every 5km, so we knew we needed to be under an hour at each mark.  At the start we hoped to put “time in the bank” by actually running each 5km under an hour and get to 30K in 5 hours.  We hit the first two 5Km markers at 45 min each and the 3rd in 30 min (probably was short) so even with the 20min breakfast stop at 20K and a huge climb around the 25K mark, we still reached 30K in 4:59, right on our goal!!!!!  At that point we were feeling great and knew we could make the time limit even if we walked the rest of the way.  From that point on, we were well into a zone that neither of us had trained for, so we did end up walking a fair bit of it with the occasional jog on downhill and flat sections.

After running in the tea fields along with the tea field workers and their homes in the early part of the course, we crossed streams and eventually dropped into a cardamom spice plantation.  Around the 35km mark, we passed into a specially planted pine forest called Pine Valley that was a big tourist draw (they don’t have natural pine forests in India).  For that part of the course, we kind of felt like we were back in the USA running around Tahoe.  The course then lead us back into more tea and spice plantations, up into rolling hills and eventually along a razor-edge cliff top path that was breathtaking.  I had a hard time looking down as the drop was rather drastic, there were parasailers flying around in the draft, it was rather awesome to be a part of.   We started seeing runners that were doing the concurrent 80K course and were running most of the 50K course in the reverse direction.  The last part of the course was an out and back section to the top of a sacred rock outcrop called Thangalpara before finally finishing at the Vagamon Orchidarium.

Whenever we ran by people we were always greeted with a smile and a hello.  Sometimes we were even asked to stop and take a photo.  Selfies are very big in India!  Several racers took selfies with us in Pine Valley.  At Thangalpara, which is this incredible rock outcrop near the end of the race, we were stopped two different times by groups of guys who were genuinely excited and somewhat surprised to see a girl running. We were asked to stop and take selfies with each person in the group!  There must be quite a few funny photos of Bill and I during this race that we’ll never get to see.

Before the race started, I was lucky to bump into one of the other female racers who ended up being the overall female winner.  I had a really nice chat with her.  Near the end of the race while I was running up the Thangalpara outcrop, she was already coming down.  Instead of just running by, she ran up to me, stopped, and gave me a big hug and said how happy she was to see me!  It was just so heartfelt and it really gave me a new spring in my step which I really needed at that point.

Bill and I crossed the finish line hand in hand with huge smiles on our faces.  We finished in 9:16 and while we were exhausted, we were so happy that things had gone so well.  Every finisher was adorned with a ceramic finisher’s medal and then each person was asked to bang a gong to commemorate their accomplishment.   They had plenty of snacks and cooked food at the finish which we thoroughly enjoyed after draining ourselves on the course.

When the final results came out, we were surprised to find out that we finished 20th and 21st overall out of around 70 finishers (out of 110 registered).  I ended up finishing 3rd of 7 women in the field, just a few minutes behind 2nd place. I have to give massive thanks to Bill for sticking with me and being such a great running partner.   We would highly recommend this race to anyone looking for a unique experience!

You can check out a video trailer for the race at:

2 thoughts on “Running Amongst Tea Fields and Spices”