A new book landed on my Kindle library a couple of months ago. Actually a few books did but I had lost track of the iPad and have gotten behind in my reading. This particular book interested me due to the content: twenty-two short stories – inspiring profiles of the rebels, rule-breakers, and visionaries who changed the sport (womens running) forever; with a foreword by Shalane Flanagan.  And the author, Amby Burfoot. 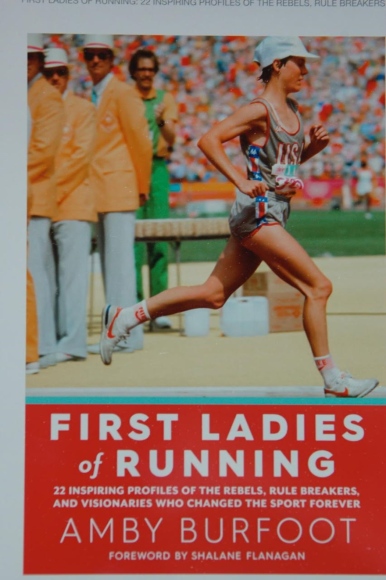 Amby Burfoot was an outstanding distance runner (Boston Marathon winner 1968) and is an outstanding writer and editor for Runners World. He has written four other books about running, all well worth a good read. His marathon PR set in 1968 in Fukuoka Japan in 2:14.28 was only one second off the American record at the time.

At the age of 70, Amby continues to run today including the Boston Marathon annually and he has run the Manchester Road Race fifty-four times in a row as of this year. If you have read Runners World you have undoubtably read one of his many articles. Amby is a veritable running historian.

What he has brought to the table in this, his fifth book, is a complete history of women’s development and impact in the running world; our world. Whether your recollection of the history of women runners may be the indelible photo of Jock Semple chasing after Kathy Switzer and attempting to physically extricate her from the 1967 Boston Marathon or equally indelible photo of Mary Decker down on the infield during the 1984 Olympics 3000M and Zola Budd looking back, you will have a complete understanding of the road that has been travelled.

I suspect that many readers of this review will recall the span of time between when women weren’t allowed in road races, through the  first women running in marathons, Title IX with its many implications, to the first women’s Olympic Marathon in Los Angeles in 1984.  Some of our readers were likely impacted by such and may have gotten their running start with the original Avon 10K/Marathon series.  I also imagine there are some women readers who have never heard of Title IX and take running in local and national races for granted (as they should).

Prior to 1928 women were only allowed to run up to 200m by the powers that be (Men!) because it was thought they would injure their reproductive organs. At the 1928 Olympics women were allowed to run 800M. At the end of the race, one collapsed to the track and several looked tired and in pain (as did the men in their race). Because of this it wasn’t until 1960 (Rome) that women were again allowed to run 800m. Then in 1972 the 1500M (metric mile) was added to the Olympic schedule (as a result of women jumping into long road races/marathons in the mid 60’s?). In 1984 the 3K and marathon were added (thanks to the international Avon series). In 1988 the 10K was added and in 1996 the 3K was extended to the 5K. The steeplechase wasn’t added until 2008.

[Editors note: at this time men and women compete in all of the same standard distances the only exception being the 110M hurdles for men vs 100M hurdles for women]

Yes, you have come a long way baby. Of the many rights that took so long to achieve; voting, equal opportunity to education (college, post-graduate, medical and law schools), to have to fight for the right to be free to run in a road race seems almost ridiculous and at the same time it is an activity, to me, that is basic to life. I am happy that in my life I have had the opportunity to run with and against women in many races beginning at Central Jr High in San Carlos when a young lady named, Roberta ‘Bobbi” Clapham, could out sprint all of the boys. The first real race of my life was in 1970 (Age 15) at the Bay to Breakers where I was passed by many women many of whom were not only better trained but were frankly superior to me. And for the last 45+ years I have looked forward to running with women especially the shared experience of training and racing together multiple times a week.

Do I recommend this book? Absolutely. I think everyone should read it. It is an important part of the history of our sport and lifestyle. The format of twenty-two short stories makes it a book that can be read all at once or over time. It would even make a nice nightly read of one or two chapters but I found that reading it as one story allows for more fertile connections between the intricacies and interactions of each woman depicted.

As an avid fan of all things running for most of my life and a reader of running history it always intrigues me when a book is informative and adds to my knowledge base. Amby Burfoot has written an excellent and informative book for everyone including children and adolescents. If the history of women’s running is of interest to you this is a must read.