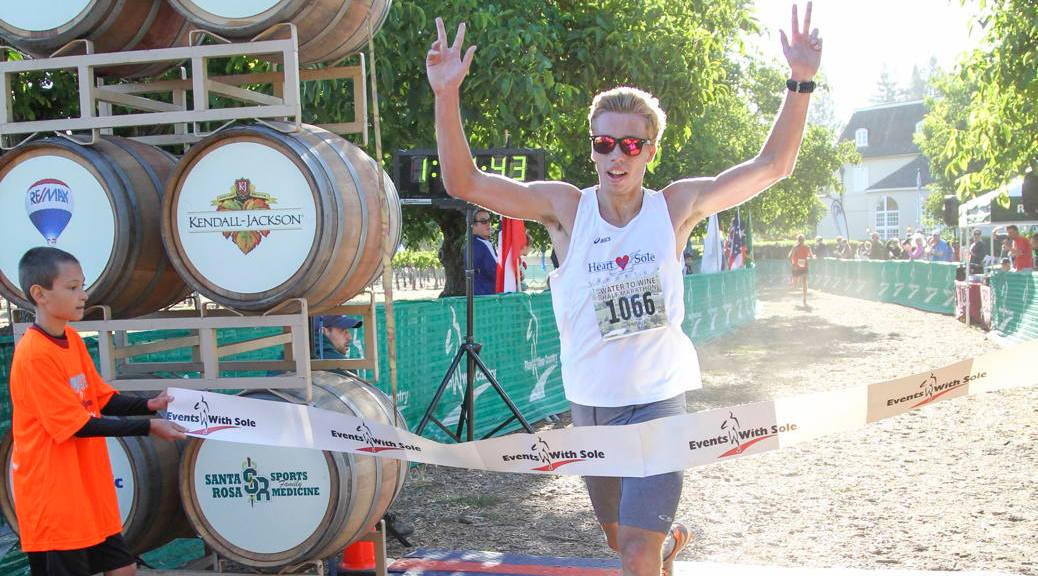 Vojta was born in the Czech Republic right after the fall of communism July 30th, 1989. When he was young he was always very active alongside his only brother and sibling Honza. They hiked almost every weekend, went bike riding with their dad, cross-country and downhill skiing etc. starting at the age of three. Vojta enrolled in gymnastics from first thru fourth grades until they moved to the U.S. with their mom. This was a fresh start for all of them.  Everything was new – language, culture, sports, environment, friends, food you name it. It was at this point that Vojta and his brother became really close.  Since they only had each other, they had to have each others back and help each other through everything. They didn’t know much English at all when Vojta came to America at the age of ten and his brother Honza was eight. Since Czech was the only language they knew it was tough to communicate with others. 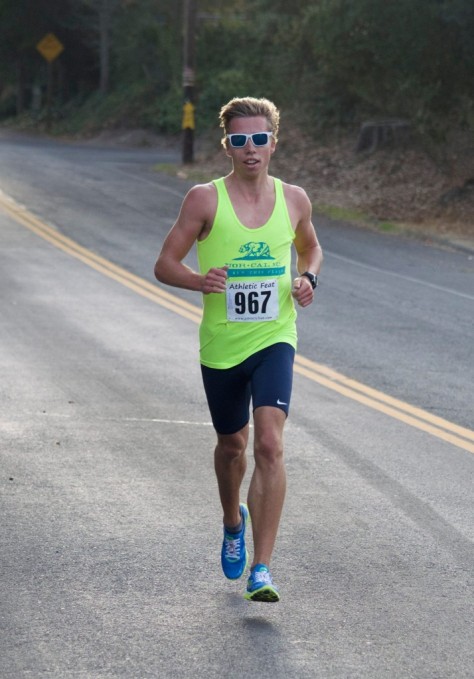 Vojta didn’t do much actual running per se’ until he came to the U.S. where his first encounter was a timed run in fourth grade PE class while living in Lake Tahoe. Vojta was surprised to find himself in first place as he had never ran much before but he came to like it. It was a great way to fit in at school. Seventh grade was the first time Vojta ran as a member of an actual track team for Healdsburg Junior High. He started out as a sprinter, but the next year he wanted to challenge himself with longer distances and decided to run the 800 and 1600. Distance was tougher for Vojta given he had asthma ever since he was small child, but he found that the more he ran, the stronger his lungs became until it got to the point where he “lost” his asthma completely. Vojta was always a member of his various school’s track and cross-country programs until he graduated from Stanislaus State.  He got more and more into it every year. Even now he keeps it up because it was something he grew up with and it is still something he enjoys.  Vojta says there are a million more reasons why he likes to run.

You are involved in a lot of activities besides running –  mountain biking, kayaking, obstacle courses just to name a few.  How do you fit it all in?

Vojta: I like sports in general. I feel activities are a key part in life, whether its competitiveness, bonding/teamwork, or just getting and staying in shape and maintaining good health. Beside the previous activities I’ve mentioned, I like to try anything; but repeatedly I like mountain and roadbiking for cross training, I’ve done a few short tri’s, which are tougher for me since my swimming isn’t great, weighing me down heavily. I have even tried the Battle Frog race at Lake Sonoma which was a combination of obstacles, muddy trails and a long run over seven miles long. It was surprisingly challenging due to the emphasis on upper body strength which most of us runners lack but it was still a lot of fun!

Were you always a runner or did you experiment with other sports?

Vojta: Between fifth grade and high school I experimented with other sports, until I found running. Sports I participated in include: football, baseball, basketball, soccer, golf, karate, and wrestling. 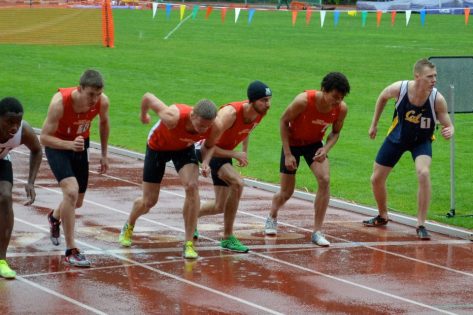 You ran some impressive times in the 800 and 1500 when at Stanislaus, consistently below two minutes in the former and in the low fours in the latter.  Do you feel that you are natural middle-distance runner?  Why or why not?

Vojta: I started running very well my second year at the JC under coach Whitney and Pat Ryan. My marks got down to 1:55 in the 800m and 4:02 which is my current PR in the 1500m. I was in very great shape to run much faster in both events at CSU Stanislaus but come to racing I only bettered my 800m by 1 second. I feel like at the time those events were the right ones for me. I tried experimenting with the 4×4 and ran a few 49 splits, and I tried the 5k and ran in the low 16 minute range, but neither compare to my performaces in the 800m and 1500m events; Based on that I feel like I BECAME and maybe still am a natural middle distance runner. I feel that my body type shows and mimics a middle distance runners. Being a little bit more stocky than long distance runners but not to the point of most sprinters.

If you could have one race back – to run it again – what would you do differently and why?

Vojta: There are two important races that I’ve constantly looked back on. Both were in the 800m. The first was at the JC level in the NOR CAL finals. There were 8 of us in the race but only 4 made it to the state meet. I was running the race of my life and was up there with the leaders. We only had 200m to go which is usually my strongest part of the race. Unfortunately I got boxed in and then one guy cut a bunch of people off which made a few of us slowdown and lose our momentum. I tried fighting back, but finished in 5th place, missing the state meet by 1 second. If I had known and had a chance to do it all over again I would swing to the outside earlier which would have gave me a clearer path to strike with 200m left, make it to the state meet and probably PR.

The other race was the NCAA division 2 conference trials in the 800m where they postponed our race 15 minutes or so. Instead of staying warm and loose I decided to just sit there conserving energy. This may have been the cause which resulted in a total breakdown race for me where I had no energy in the most critical race of the season, fell apart and felt completely out of it most of the race. I should have stayed warm and sharp instead.

What are some of you short term goals?  What are you working on now and how have you adjusted your workouts to achieve them?

Vojta: Trying to run post-collegiately is definitely not easy. Finding motivation is sometimes tough to start, but after getting going it’s also hard to stop. Short term goals are staying injury free and getting in shape for the Boston Marathon and running a good race at Annadel Half Marathon. (which may be over by the time this is published).

Right now I’m just working on building up my millage and getting used to maintaining a fast pace for a longer period of time. To achieve this I do longer runs at a faster pace or longer interval training instead of short sprints. Endurance runs are something you can keep increasing so I’m finding myself pushing boundaries and testing myself on long runs in terms of increasing my distance, lately hitting 100 miles per week.

Vojta: I haven’t really planned my long term goals too much. I don’t plan ahead too much which may be a bad thing, but I like to plan maybe a few months in advance if something comes along. Running Boston was my big goal since last spring and I’m making that happen in just a few weeks. PRing in various events is always on my mind and trying out new races at various locations is fun for me. I would like to keep running as long as I can because its so good for you healthwise, and a great way to release stress and unwind. Competitive running makes this easier to do in my opinion.

Most distance runners revere the great Czech Olympian Emil Zatopek – who inspires you and why?

Vojta: Specifically, Galen Rupp has been very impressive to watch, but its anyone who keeps pushing the boundaries and working hard day in, day out. One example is Sarah Hallas who is my roommate who never seems to stop, at age 35. With a 2 year old, full time job and a fiancé, she runs as much as I do and works out 2 to 3 times a day during the week, and wins marathons on the weekends.

On the lighter side – how do you relax and unwind after a hard run, race or workout?

Vojta: Beer, food and sleep are always nice. I like going out and playing golf, going to the beach and just being outside is relaxing to me. I also like watching sporting events on TV, hang out with friends or doing numerous things on my computer, like looking at new races to run.

What is your favorite track workout?  Road workout?  Cross-Training activity?

Vojta: Being a middle distance runner I always fall back on track workouts. I start with what I know and try to switch it up in different ways. I usually fall back on 400m repeats, various rest times, speeds and quantities.

I haven’t done very many road workouts, increasing my pace every mile is what I usually find myself doing on the roads.

As for cross training I would say road biking or mountain biking.

Sports nutrition advocates run the gamut from Vegan to Paleo and everything in between.  What is your stance / advice?

Vojta: Eating healthy is definitely important but I don’t always find myself doing that. I usually try to get my protein in after workouts and get my carbs in before and during long runs. To get my fruits and veggies in I usually make salads and protein smoothies which are great. Different things work for different people. I’m sure my diet could use improvements but I don’t find myself super strict with it. I believe getting in a good amount of food to recover your body is important and starving yourself to lose weight is very unhealthy and I against that. If your exercise especially a lot such as myself you need to refuel, and yes you can afford to eat whatever you want. If I was running Pro or close to it I think I would pay more attention to my nutrition, but I’m happy were I’m at.

Lastly – is there some question you wished I had asked, or something more you would like to share?

Vojta: Maybe a good question most runners get asked is: why do you run?

There is a long list of why I run but one big reason for the last six or so years has been my brother Honza.

As mentioned in my bio, Honza and I have been very close being the only siblings, and we competed against each other in everything.  Even though he wasn’t as dedicated to running as I was, he could kill me on the golf course any day of the wee.  Just after he graduated from High School, he got into a terrible and life-changing river diving accident that left him paralyzed from the neck down.  This affected not only him but everyone around him, especially me.  Now we go golfing together on the weekends because that’s what he loved to do before the accident.  I feel his accident brought me closer to running for a number of reasons.  It gives me and out/release for my emotions, but also I feel I have to have fun for the both of us.  It made me realize that in the blink of an eye life can change and so I need to keep enjoying what I like to do while I can, and make it count.