Is there a better way to spend a summer evening? Outdoors, with your kids, getting in some exercise and soaking up the excitement of a race environment? We look forward to Summer Track Series every year.

My favorite part of track night is watching the kids line up. Their tiny bodies bump and jostle as Tori Meredith warmly sorts them into heats. The littlest ones first, some still mastering walking. Then the preschoolers. “Are you 4 or 5?” they ask each other before swapping positions. The 6-year-olds know the drill by now, and the 7-year-olds stand, casually stretching. Behind them are the bigger kids, the high-school track stars, the college-level athletes, the adult running fanatics, and the casual participants. 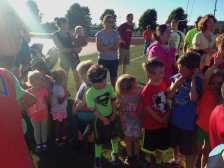 This is how our kids fall in love with running. By being a part of a running community.

My son George first started running the summer track series in the summer of 2013 when he was 3 ½. He ran the 100m smiling all the way. In the 200m, he learned how to stay in a lane. In the 400m, he discovered what it was to be winded. In the 800m, he walked a lot. But being a part of a running community means that you are judged based on your attitude, not on your times.

After George had run a few individual races, a group of three Montgomery high school kids approached him and asked if he’d be available to anchor their 4 x 400m relay team. George didn’t know what a relay team was, but he was definitely game. They walked him through the event and showed him how to hold a baton. And when it was his turn to run, they ran right alongside him the whole way, cheering him on even as he was being passed by all the other teams. As he crossed the finish line, the entire crowd applauded him. 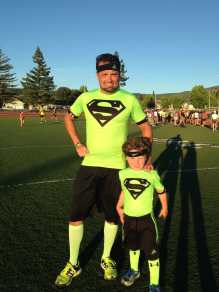